Skip to content
Home / About / About F.E. Bennett Co

F.E. Bennett Company offers a broad range of Material Handling Equipment and supplies in Portland, OR and across the USA. Material Handling Equipment is equipment that relates to the movement, storage, control and protection of materials, goods and products throughout the process of manufacturing, distribution, consumption and disposal. F.E. Bennett Co covers the bases in all these categories. Storage equipment, such as Pallet Racking, shelving, cabinets including die storage and lockers. Engineered systems, including conveyors. Handling equipment, including hand trucks, casters, gantry cranes, pallet jacks, carts of all sizes and shapes, hoists, stackers, lift tables, die transfers and much more. F.E. Bennett Co prides itself of being part of the Portland Business Community for over 92 years and having provided quality products to over 10,000 customers of all sizes. As a distributor we have relationships with manufacturers all over North America. 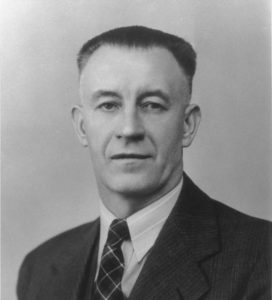 The history of F.E. Bennett Co. goes back generations. Forrest Entiat Bennett came to Portland, OR from Seattle, WA in the late 1920’s as a sales representative. He was so accomplished that Bassick Casters asked him to sell their products on a consignment basis. Thus, the first F.E. Bennett Co. store opened. Forrest’s son Walter began working in the business as a teenager in the late 1930’s. After World War II he came to work for the company full time.

Forrest was an avid hunter and golfer and upon his sudden death in 1955 Walter took over the company. Walter successfully grew the company and was blessed that all six of his children worked for him at various times.

After Walter’s death in 1991 his son Donald Bennett was appointed President. Don worked diligently and his contributions and thoughtful style of leadership helped the company grow and endure through many years of economic changes. After more than 40 years Don retired January 1, 2019. His love of the outdoors will keep him busy for many years.

Walter’s daughter Susan became CEO in 2019 and has steadfastly directed the company through 2021. She will be semi-retiring in 2022 after 45 years of employment.

Aaron Voorhies, the great grandson of F.E. Bennett, is stepping into the President’s role. The company is now in the hands of the fourth generation, and Aaron will continue to develop and guide the company to a prosperous future.

Although, the original line of product was casters, F.E. Bennett Co is now a ‘full line’ distributor of material handling equipment. This covers a variety of items that can be used to handle and move equipment and products. The company specializes in hand trucks, pallet trucks, dollies, dock boards and other related dock and warehouse equipment.

The highest principles, work ethics and customer service have been passed down from generation to generation. We think Forrest would be proud to see his legacy has continued.